It has been noted that my updates as of late have been few and far between. This is true. So I’d thought I’d share an insight into my schedule this week. This should help clear up any confusion as to why my ramblings have been on the decline…

Tuesday
11-1 Singing
1-4 Food shopping, getting home, doing laundry, cooking/eating ( the former genuinely being a once weekly occurrence) Skyping neglected boyfriend, getting ready and travelling back to school for…
6-8 Dance
8-10 Play rehearsals

Thursday
9-1 Musical Theatre
1.30-3.30 Building A Character
And I’ll stop there as this week, for one week only, 3.30pm sees the start of a weekend “off” to honour the fact my fabulous best friend, Charlotte, is flying in Thursday evening and staying until Monday. This of course means my time will instead be spent being a tour guide (a good one, I hope) and my vocal chords will be put to good use putting the world to right and generally squealing over the excitement of NYC.

Anyway, recent highlights include a Pumpkin filled trip to Connecticut, some lovely feedback from classes about work at school, wonderful rehearsals for the ever looming production next month, social outings with people who are fast becoming some of my favourite friends and a (complimentary) theatrical evening at the Rattlestick Theater watching Adam Rapp’s “The Yellow Hour.”

The next two weeks will be joyously filled with the arrival of Charlotte and then the afore mentioned neglected boyfriend. Throw in some Halloween celebrations and the usual crazy hours and it’s safe to say that I will be kept well occupied, under fed (joking Mum) but still having the absolute time of my life. 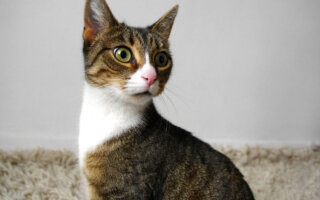 Adopting a cat from Celia Hammond