Driving Iceland’s Golden Circle is one of the most popular ways to spend a day when visiting the country. Not to be confused with the Icelandic Ring Road (that one takes you around the whole country. Not so ideal for a day trip), this unofficial yet incredibly well known tourist route takes in some of best natural wonders within close proximity to Reykjavik. It was our first full day in the country and we couldn’t wait to get going. Here’s how we saw the Golden Circle.

While there are plenty of coach trips to choose from when it comes to seeing the Golden Circle, self driving allows for some spontaneity throughout the day. This is definitely our preferred option and I am *incredibly* lucky to have my very own  driver boyfriend who doesn’t mind taking on such responsibilities until I’m able to share them. The car rental company we went with Geysir offer 10% discount at Olis gas stations (as well as free coffee and wifi) and the cost was roughly £1.40 a litre, which is just a little more than current London prices. As a note on payment, Iceland has perfected the art of contactless. Even the public toilets accepted cards as a payment option. We in fact spent the whole trip cash free, which seems like something of a novelty. The only site on the Golden Circle we paid for was Kerid Crater Lake (which we visited on the way back Reykjavik later in the week). The rest were entirely free which helps to somewhat balance out the general high cost of living that’s inevitable when visiting Iceland.

Knowing driving the Golden Circle would be how we would spend our first day, we based ourselves in the midst of it in the cutest and most compact Airbnb you ever did see. We drove there from the airport the day before meaning come morning we could set off at a reasonable time. I completely recommend the Airbnb for those looking for a convenient base near Selfoss with a huge, private hot tub, cosy robes and self catering facilities. It was perfect. 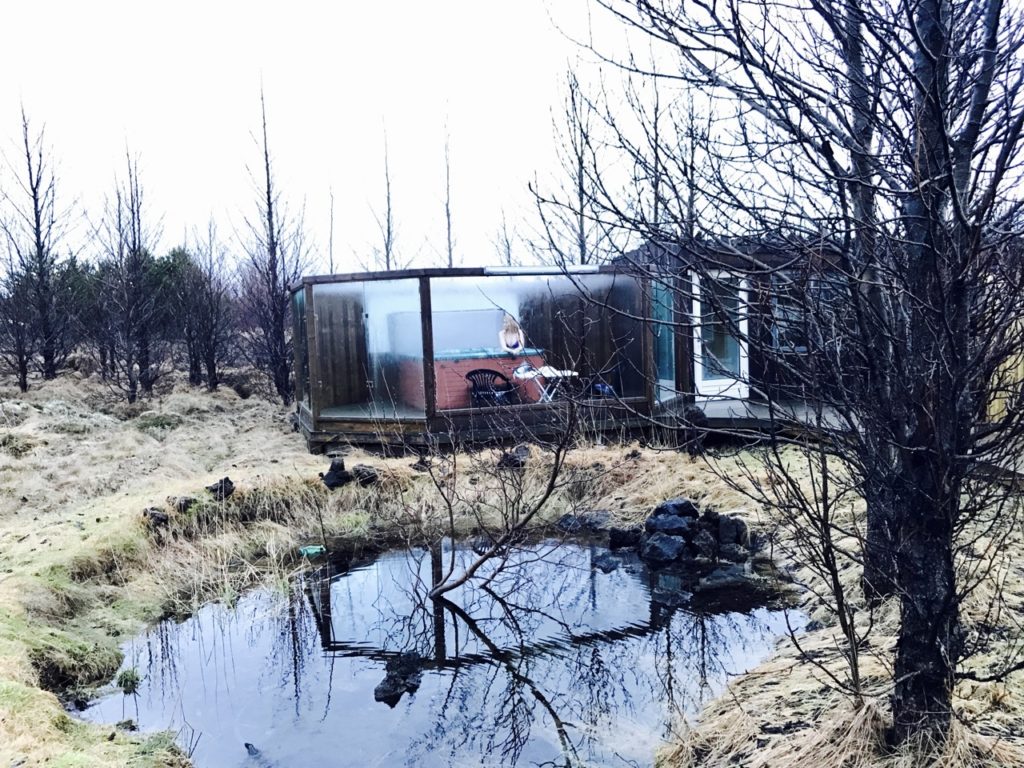 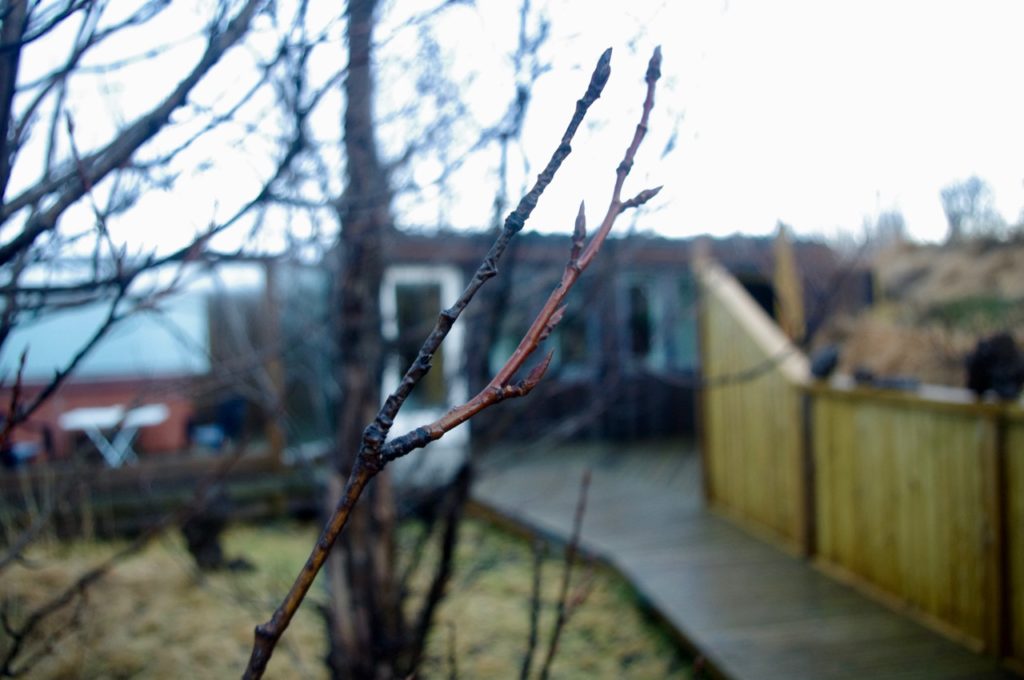 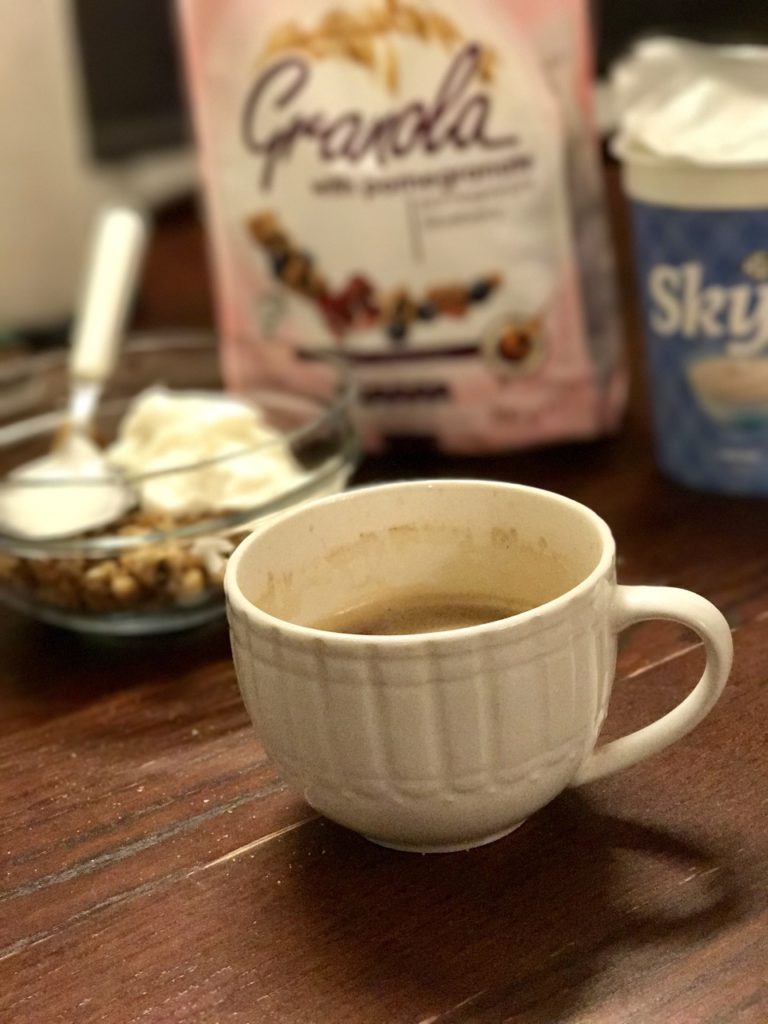 Choosing to go anti clockwise in a bid to maybe go against the masses, our first port of call was Faxi– a waterfall that’s allegedly full of salmon. Our salmon sightings were in fact zero so I am relying on Wikipedia to confirm this fact. It was a very quiet spot reached via a track just off of the main road with only a few other people around. Not as well known as some of Iceland’s other offerings but impressive all the same. There are definitely worse places to watch the sun rise, that’s for sure. 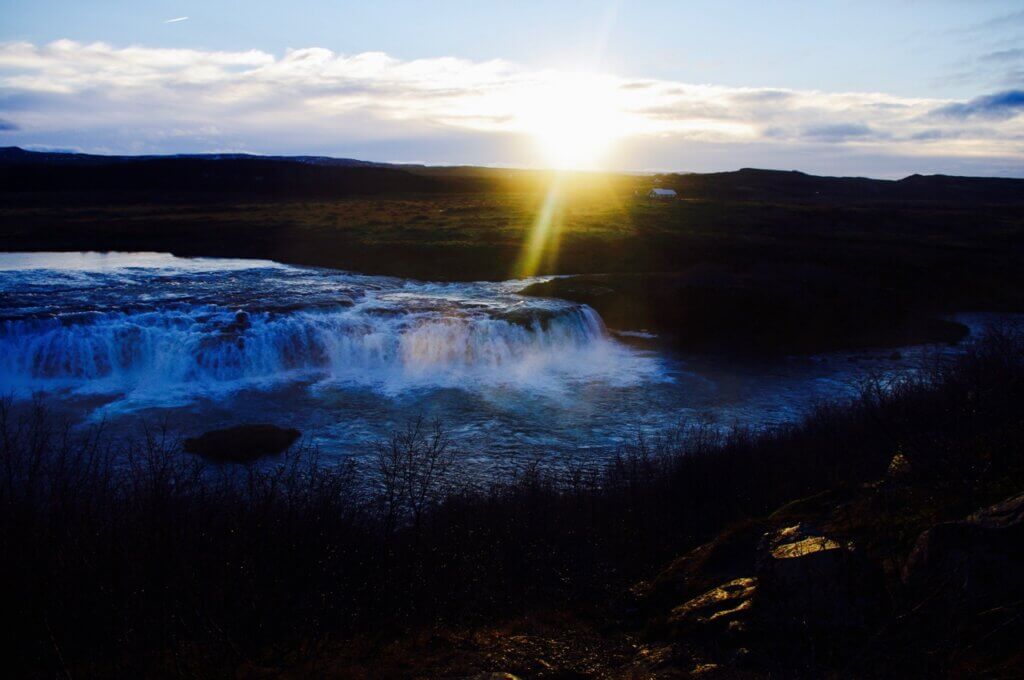 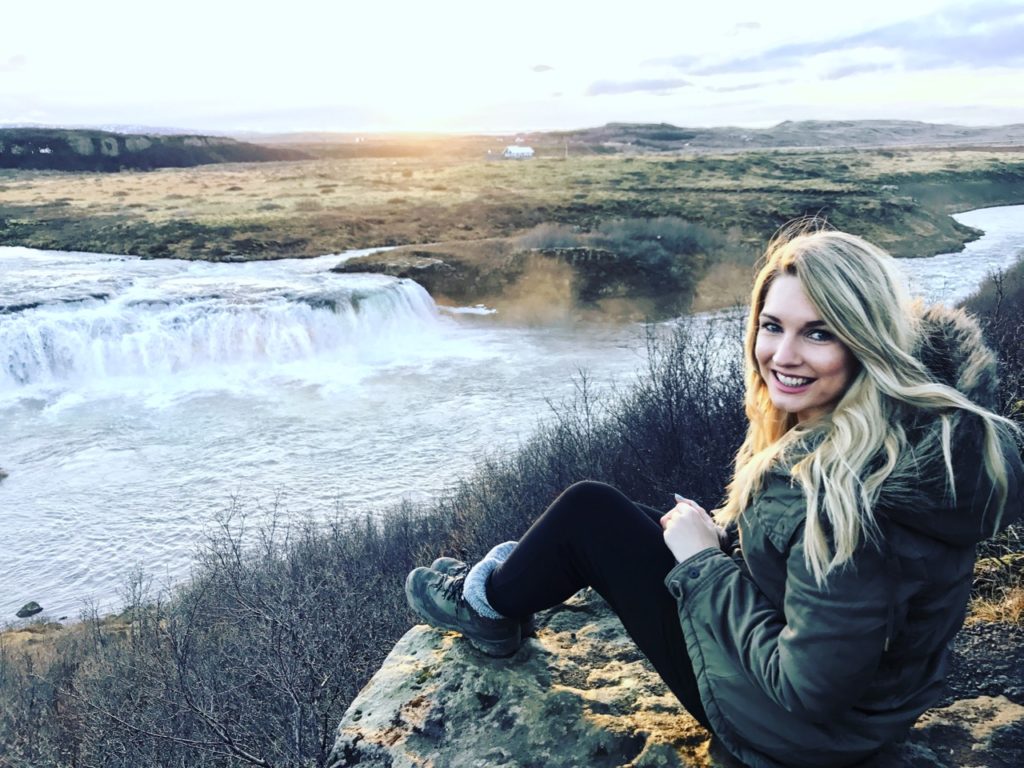 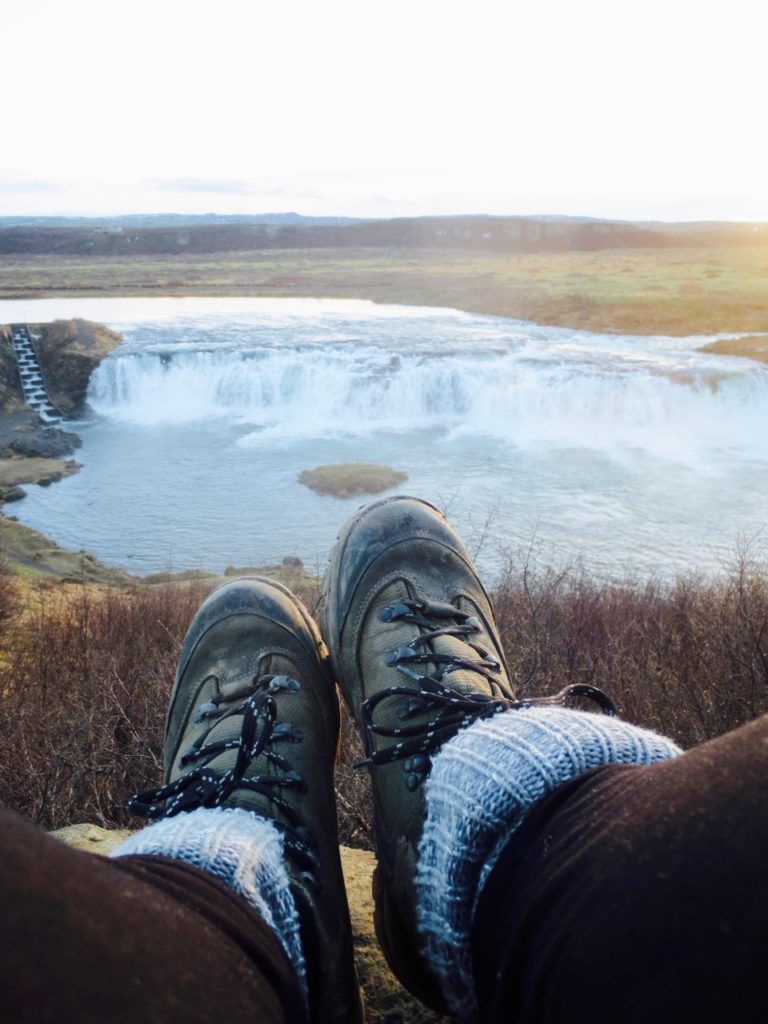 From here it was onwards to Geysir and the other geothermal marvels of the Haukadalur valley. There is an impressive gift shop and restaurant here– the interior of which looks more like a page of a Scandi inspired edition of Good Home magazine than a construction designed to encourage tourists to part with money. Overpriced items available to buy include but are not limited to: bottled Icelandic air (which, actually, now firmly back in London I need to stop mocking and would actually consider paying for), all the Icelandic clothing, some taxidermy animals and really cute postcards that I just couldn’t bring myself to spend £4 on. 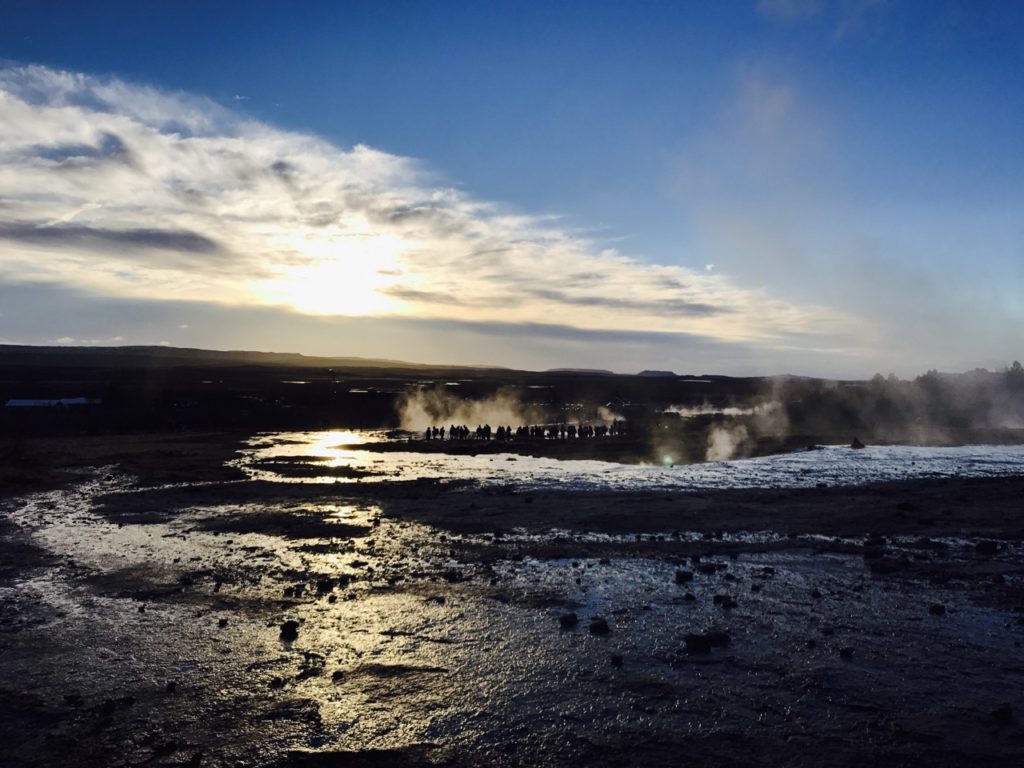 Anyway, drag yourselves out of the gift shop and cross the road to admire the eruptions of water filling the skyline with plenty of steam, ooohs and aaahs. A vantage point uphill is definitely recommended for an overview of the activity before getting up close and personal to really observe the bubbling and bursting. 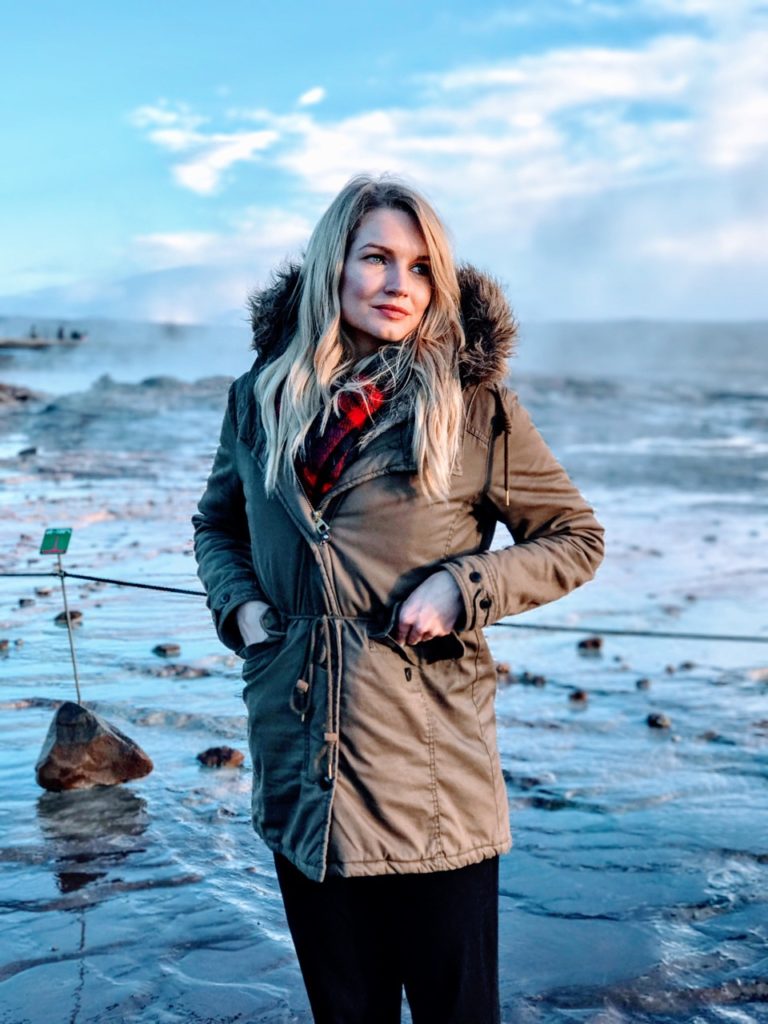 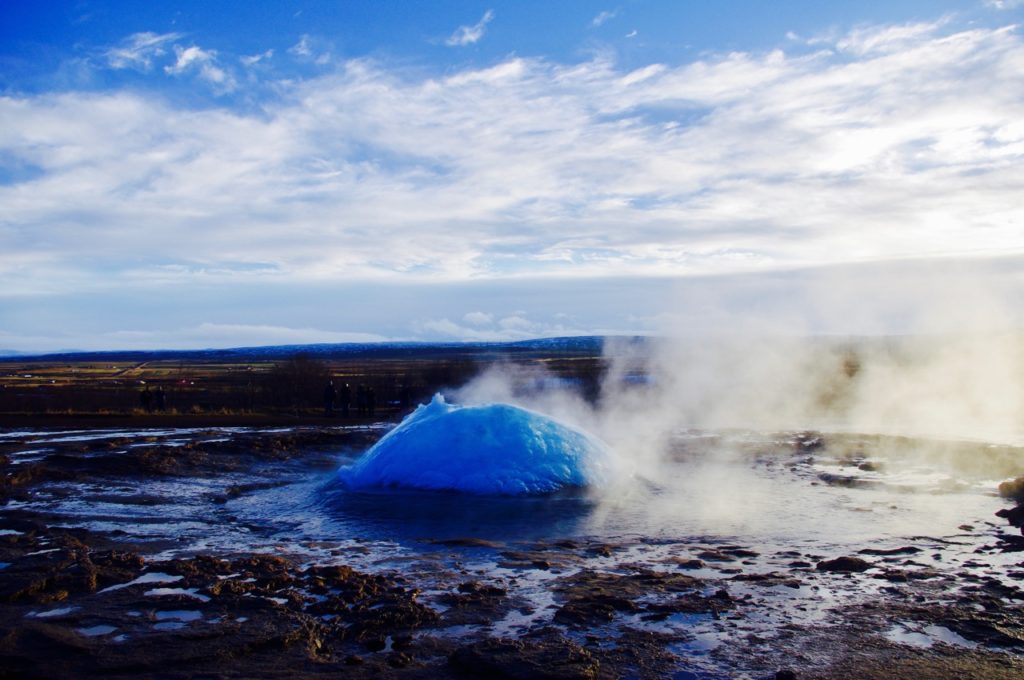 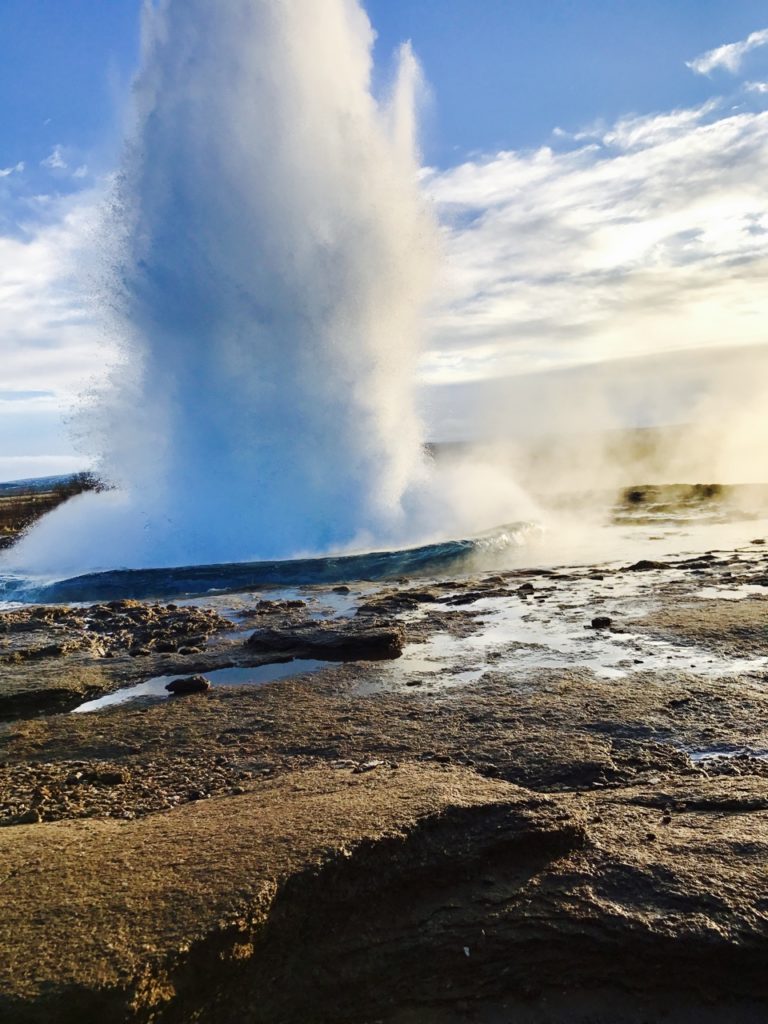 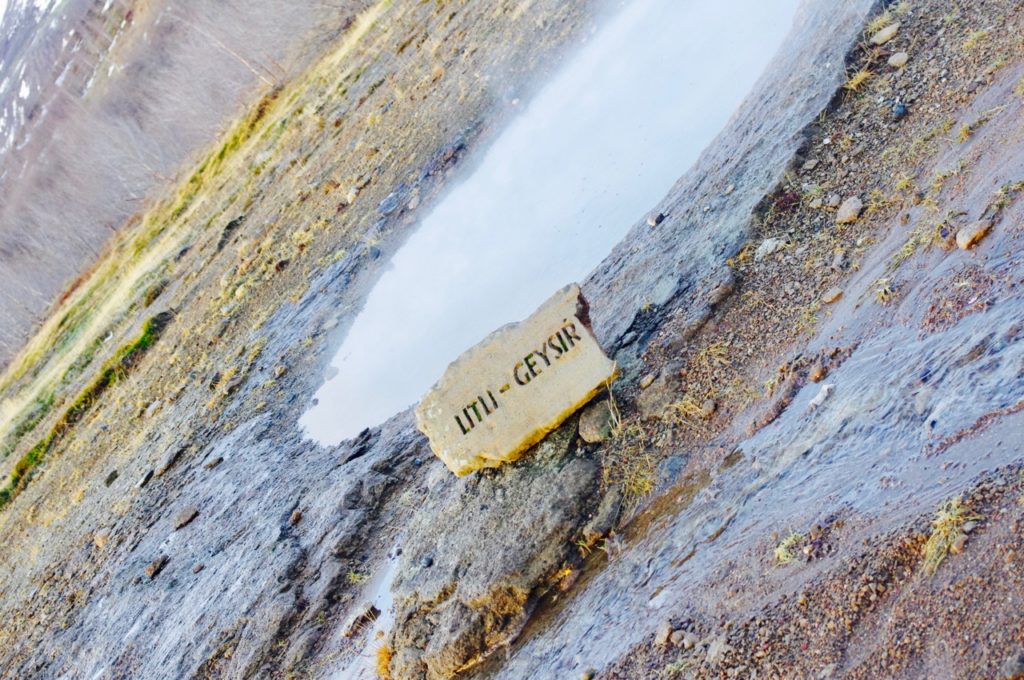 Surrounded by snow capped mountains with geometric peaks indenting a clear blue sky, I found there was something surprisingly calming about the dramatic geysers. Stay longer than it takes to get a photo and watch nature do it’s thing. 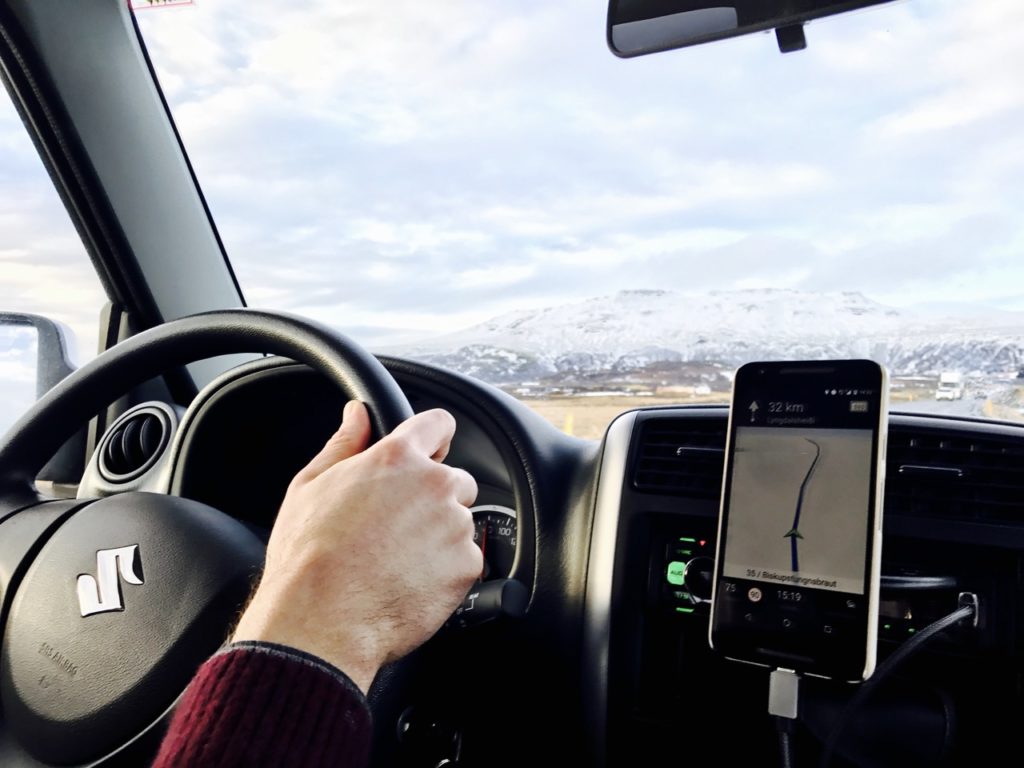 Next up was Gullfoss which is about a 10 minute drive away from the Geysers. One of the country’s most well known waterfalls and particularly popular crowd wise, this is definitely a Golden Circle stop not to missed. The sound reaches you long before any of the views do and the views do certainly not disappoint. 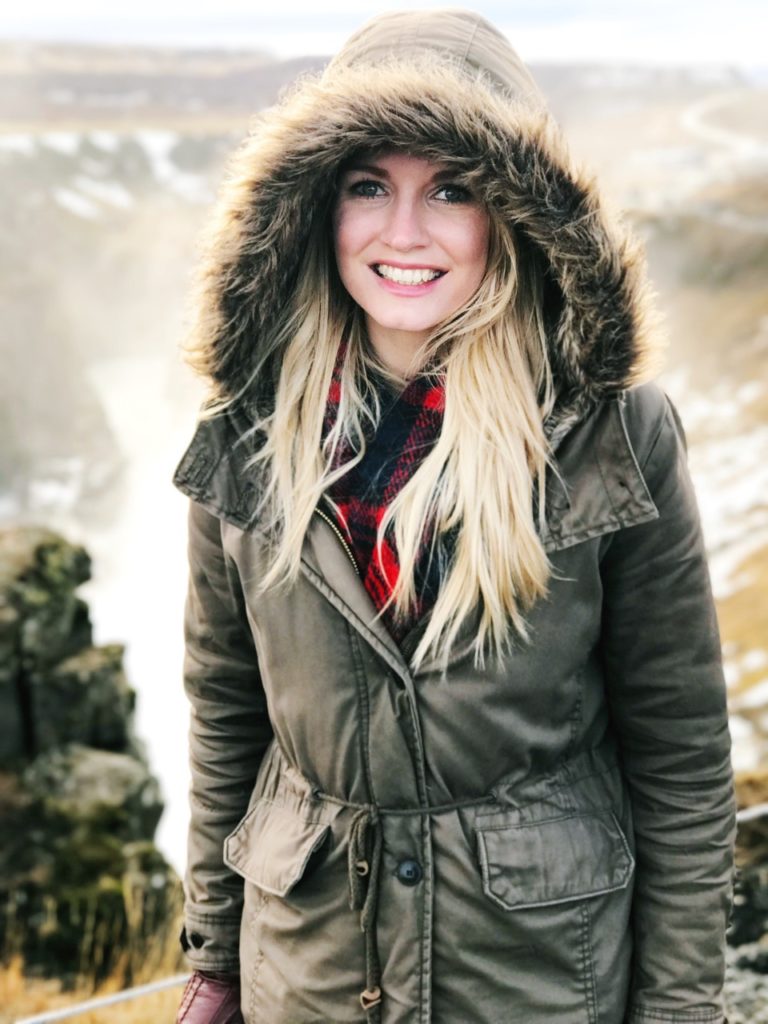 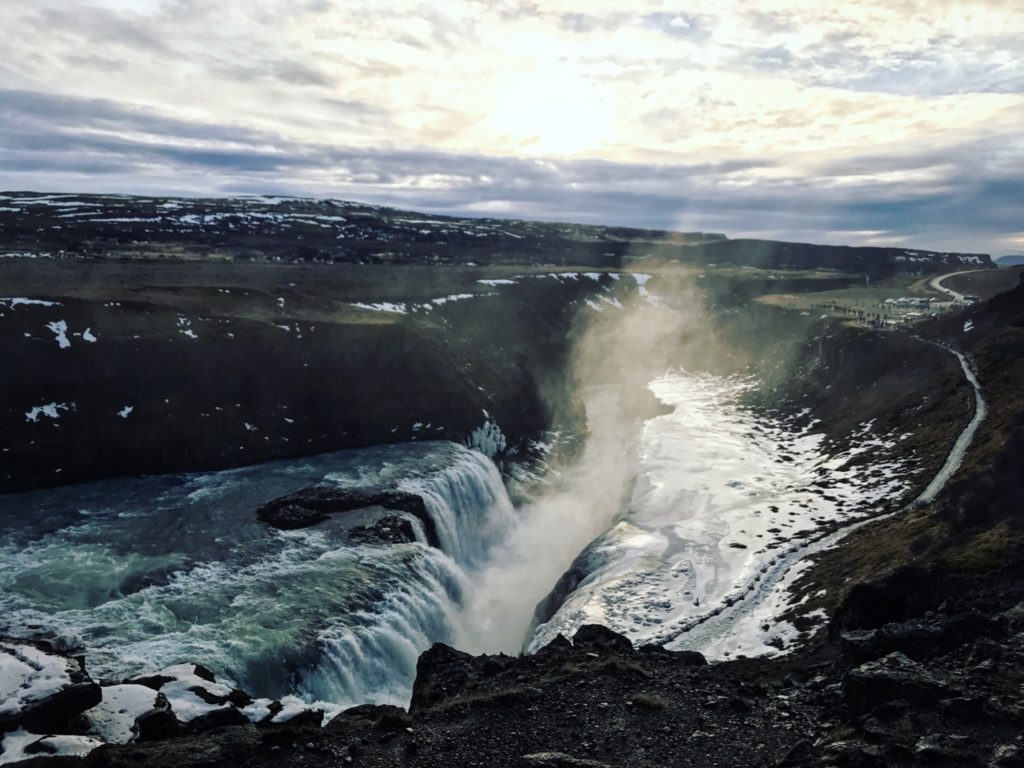 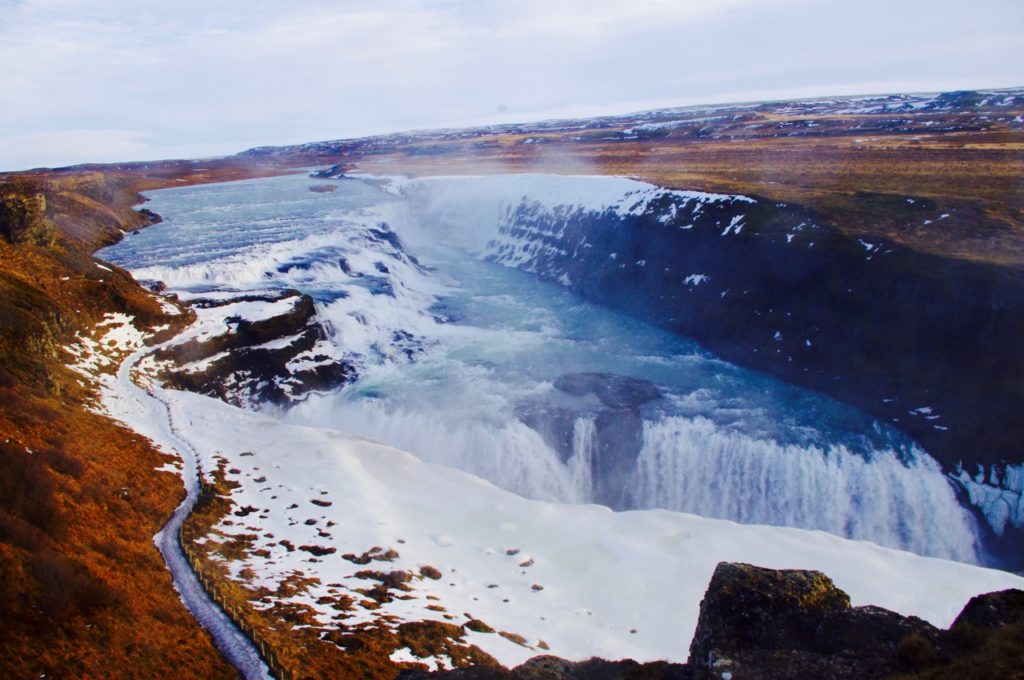 With water plummeting down 32 meters in two stages into a rugged canyon with walls reaching up to 70 meters in height it’s a truly beautiful and striking sight. It was also maybe the windiest and coldest part of Iceland for me so be a better traveller than I was and don’t leave your hat in the car. Also the paths were particularly slippery which meant walking on the grass was a much more appealing option. Dress your feet accordingly. 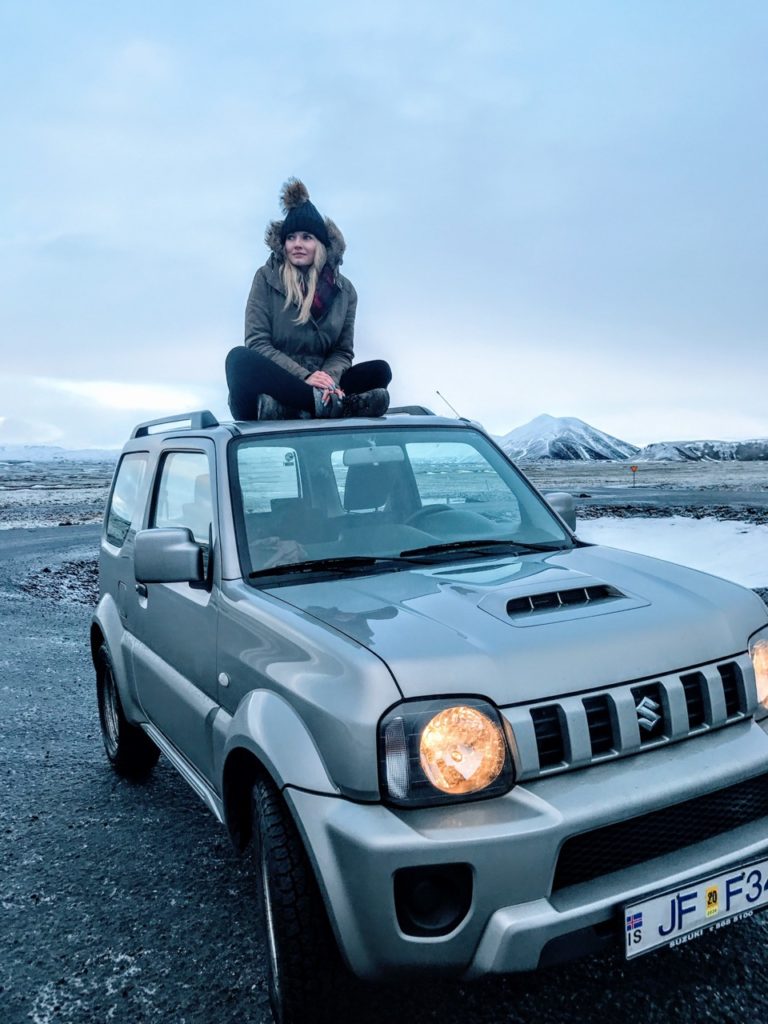 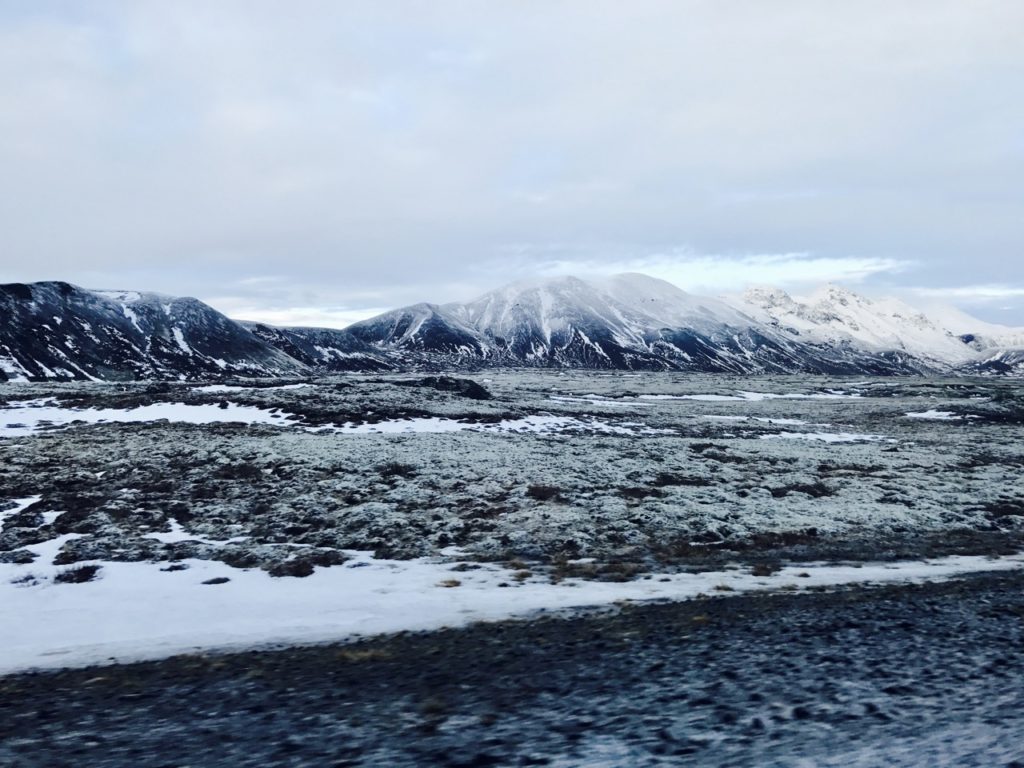 Driving west alongside towering terrain and ever darkening skies we reached our final stop of the day– Thingvellir National Park. Highlights of Thingvellir include the division of the North American and Eurasian tectonic plates, the site of the original Icelandic parliament and one impressive Game Of Thrones-esque landscape after another. Lowlights include the public toilets that are yours to use for a mere £1.40. £1.40. I despair at having to pay 30p. On the bright side you can pay via card and the views are pretty. (But that’s just me trying not to sound negative. £1.40 on top of parking is ridiculous. Make it stop Iceland.) 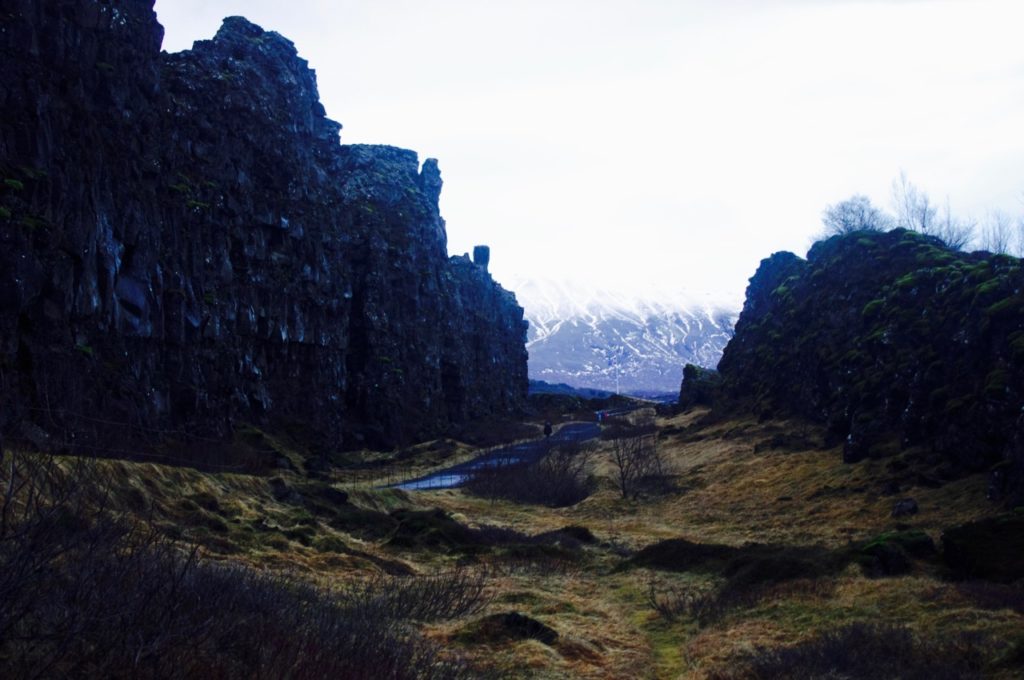 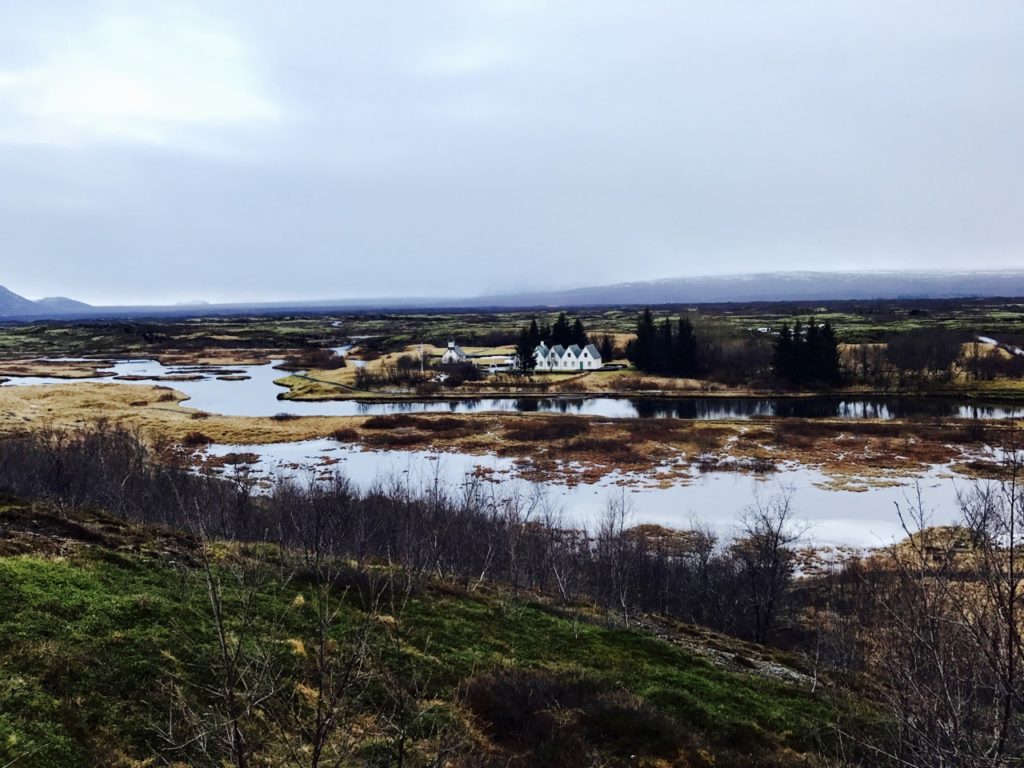 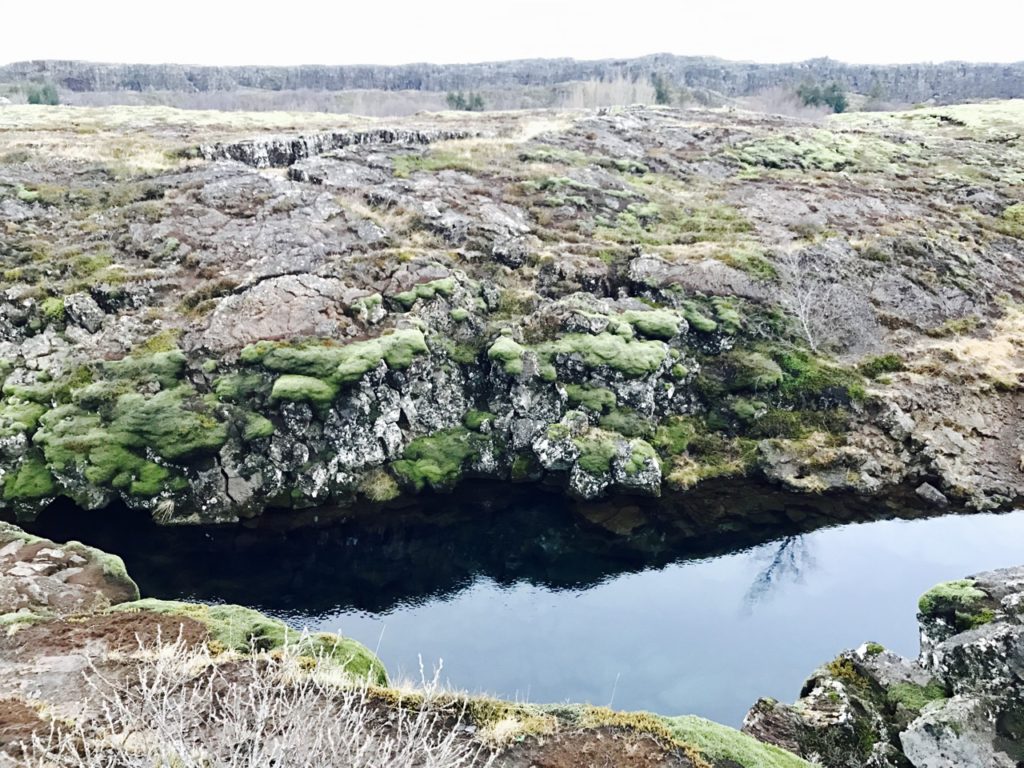 Diving and snorkelling is possible in the Silfra rift which looks like a very cool (in all literal senses) experience for those registered to do so. Where else can you swim between continents? The whole park is a geology dream. 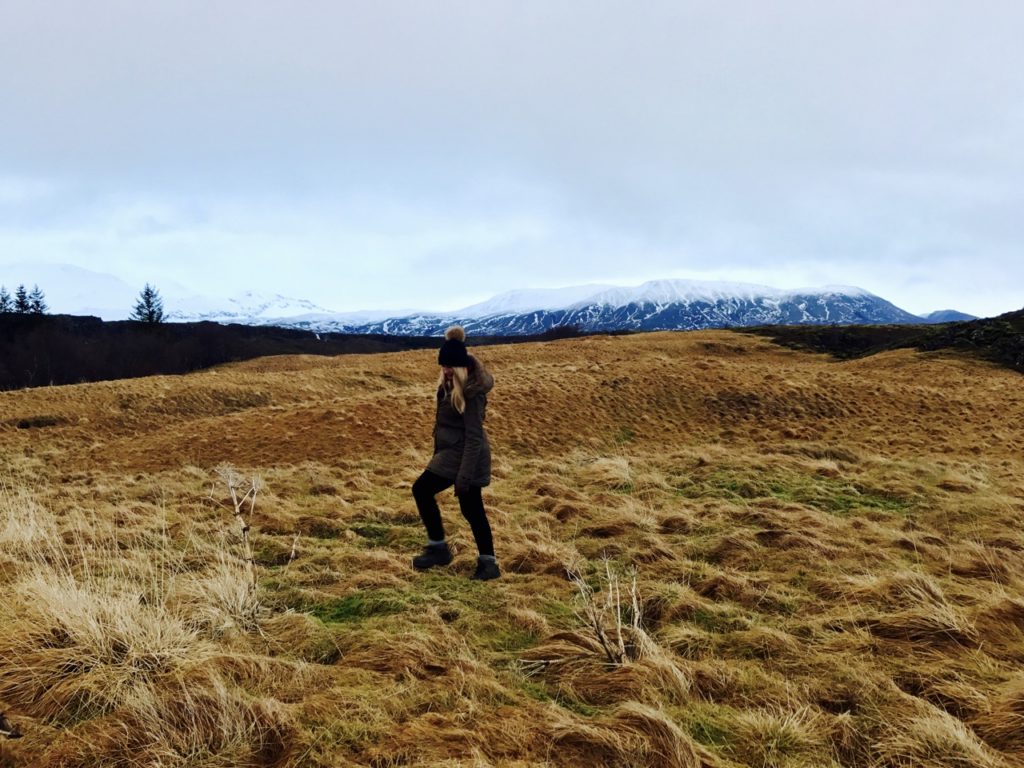 Overall I think our day trip lasted around 6.5 hours and upon arrival home to the Airbnb it was straight into the hot tub, wine in hand, to debrief (…maybe not the best phrase to use) and watch the snow begin to fall around us. We had been incredibly lucky with the weather throughout the day but it’s important to consider all possible eventualities when it comes to driving in such an unpredictable climate in winter.

The following day would see us check out of our cosy cabin and make our way south where hidden pools, horses and waterfalls would all be waiting. You can read about/watch all the highlights from the trip here. Check back soon for my blogs on the South Coast and Reykjavik! 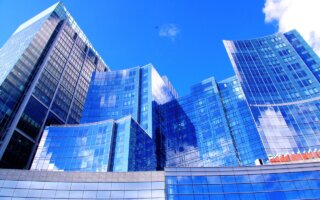 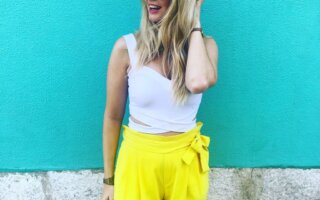 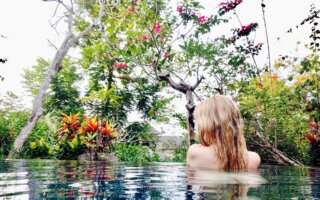