Having made the sad decision to sacrifice some extra hours in Bled in favour of some R & R in Munich we arrived early afternoon which, granted, was a much more sociable time than the original 5am plan. Making the connection at Villach was a close call as someone (not me) took us to the wrong platform meaning we had to sprint up and down stairs and leap onto the correct train with mere seconds to spare. Entirely void of any nutrition I wasn’t quite up to my usual Usain Bolt speed but somehow we made it and the platform fail was forgiven. A sociable taxi driver took us to our apartment, the adorable Poklukar Bled, where we were met by Josef the landlord. He showed us around the next in our line up of temporary homes which felt perfectly authentic and housed the most wonderful tiled wood burner. The living area consisted of a large dining table, the aforementioned even larger wood burner, a television and french doors which led into the well-manicured garden area. The bedroom was particularly large with big wardrobes and the kitchen and bathroom along the hallway were perfectly functioning and provided everything you would need for a self-catering break.

A quick change into lake appropriate attire and we were out the door. One supermarket stop (where, travel hack alert, we learned that if you say “koala” you’re basically speaking the Slovenian word for thank you) and too many neon signs (oh commercialism) later and we were greeted with the postcard epitome that is Lake Bled. Still feeling somewhat worse for wear we relaxed whilst befriending a swan of quite some stature before Tom insisted I “man up” (direct quote) and we hike up to the castle. Oh I cannot wait to suggest something similar to him after he’s been involuntarily poisoned one day. As it happened, the walk up was manageable and as pre planned we followed the “off road” path away from the castle to the free vantage point. It was spectacular. Bled Island floated atop of emerald waters encased by the finest array of delicately snow tipped mountains. Energised from the no doubt purest air we’ve inhaled in a while we opted for a 30 minute swim in the lake before the lido shut. We got in at a discounted price considering the time remaining and it was totally worth it. The water was fresh but soon enjoyable and the setting couldn’t have been better. We retired home to cook (a novelty) and get ready for the Triglav adventure that lay ahead of us the next day. 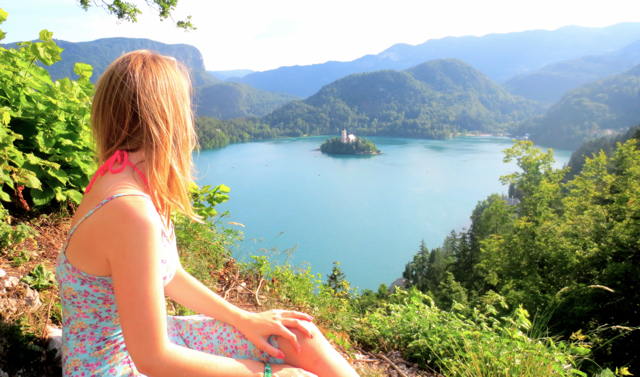 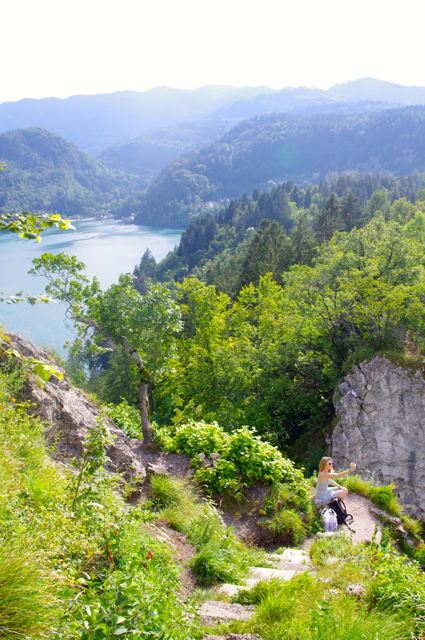 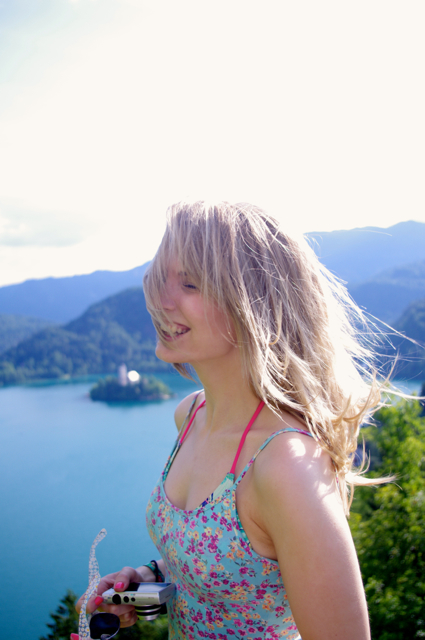 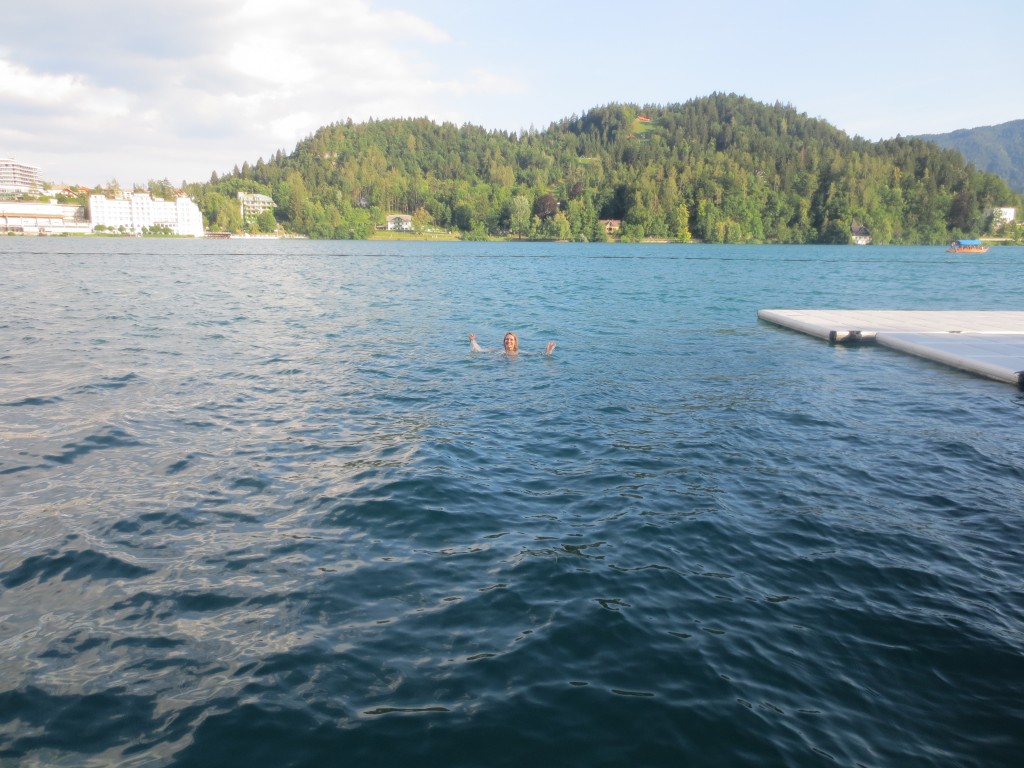 I had found 3glav Adventures through Trip Advisor where their “Emerald River Adventure” day trip was listed as the top activity in Bled.The itinerary included seeing some of Slovenia’s most scenic mountain ranges including the Triglav National Park, hiking, swimming in a waterfall and white water rafting along the soca river; the more I researched the more I fell in love with the idea and we booked our places several months ago. Fast forward to a gloriously sunny morning in June and we were collected from our apartment by our guide for the day Petra and a minibus full of five fellow intrepid explorers. We were very fortunate to have a lovely, chilled and friendly group with whom we swapped top travel tips and stories throughout.

Now unbeknown to us and evidently 3glav, an organised cycle ride of epic proportions was taking place on the day of our trip right through the National Park that we were scheduled to drive through. This meant that the mountain passes we required were, somewhat inconveniently, closed. After a scary moment in the bus where it seemed cancellation of the trip was imminent a backup plan was quickly formulated and with Petra’s optimism we persevered. Making the best of an unplanned situation was the theme of the day and personally, I loved every second. We got some truly unique experiences out of it and an immediate group camaraderie was formed. After visiting the iconic Triglav Mountain Goat statue we stopped for coffee (and a very early beer for a few) at a restaurant situated at the disused Italian/Slovenian border. We revelled in some traditional Slovenian live music, incredible Alpine views and the warm atmosphere watching the cyclists power through the mountains. Once the riders had passed we could continue and although most of the hikes were taken off the agenda the rest of the day ran near enough as planned. We stopped at some of the most spectacular spots of natural beauty and along the way Petra would regale us with tales of Slovenian folklore which just added to the already fairytale-esque scenario. 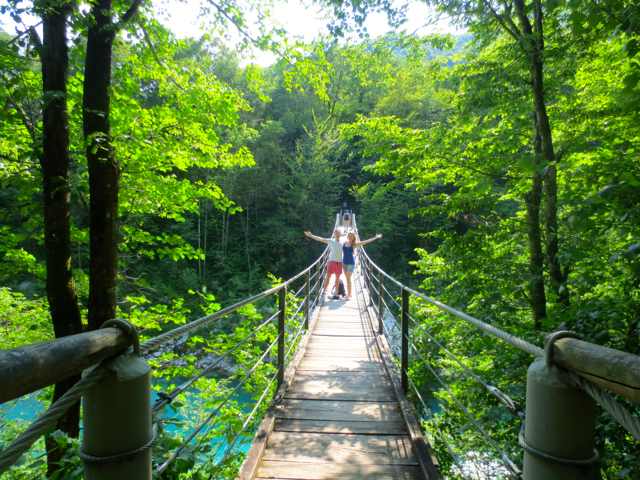 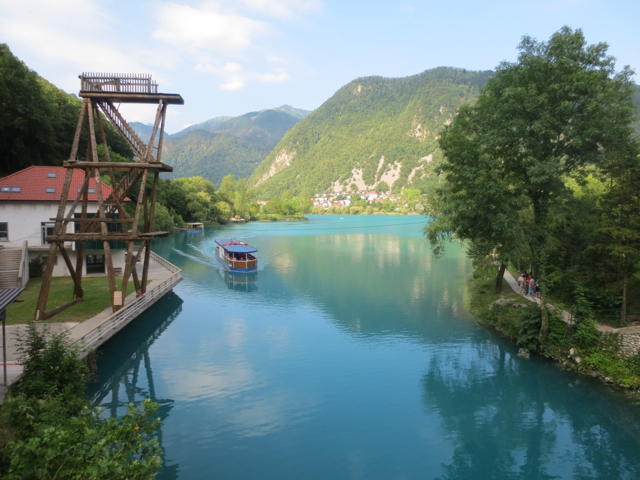 From hiking across a bridge of questionable stability, to swimming in amongst waterfalls and jumping off ridiculously high ledges the day is comprised of activities to suit both the more cautious and fearless of adventurers. The white water rafting was not quite as “extreme” as I had imagined but provided ample entrainment in amongst the greenest of waters and for first timers like us it was the perfect introduction into an activity I know I’d be more than willing to do again. Our guide for the rafting was wearing a Tshirt that said “meow” which led to another snippet of Slovenian knowledge from Petra who told us that if someone has a hangover in Slovenia it is known as “having a cat.” Wonderful. 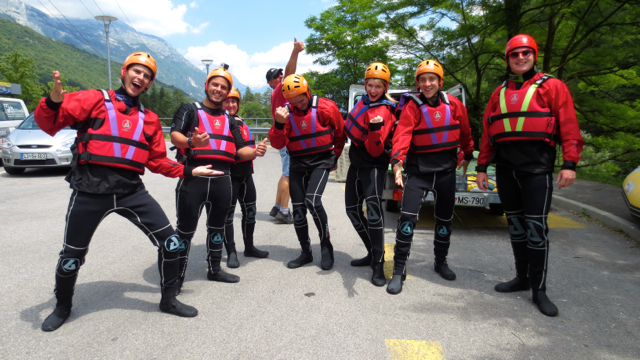 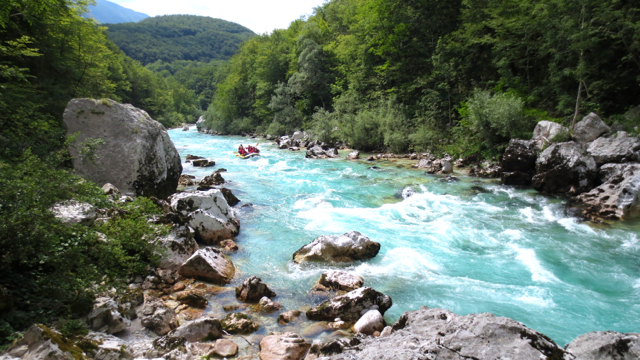 A cool beer aboard a warm car train ended the day’s activities before we stopped for some final group pictures as the sun started to set around us. I honestly couldn’t recommend this trip enough. The colour of the water, the scale of the terrain, the friendliness of the locals and the picturesque rural villages all have to be seen to be believed. We met a lady from Manchester as we were leaving who told us she had moved to Slovenia two years ago and hadn’t looked back since. I don’t blame her at all. 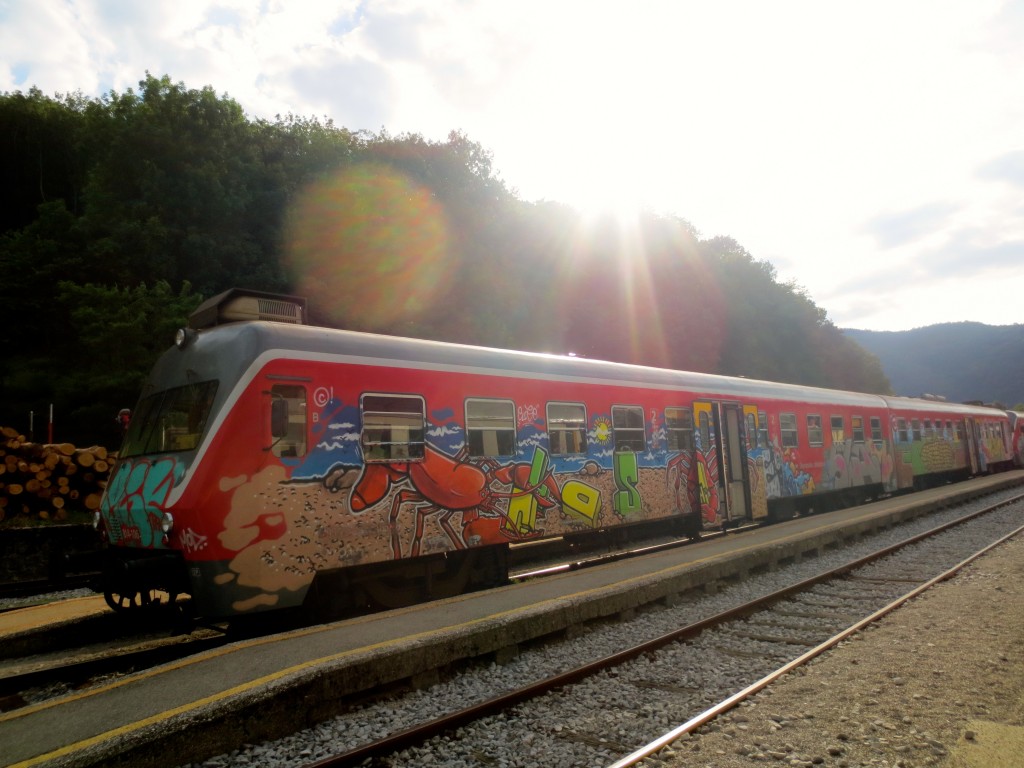 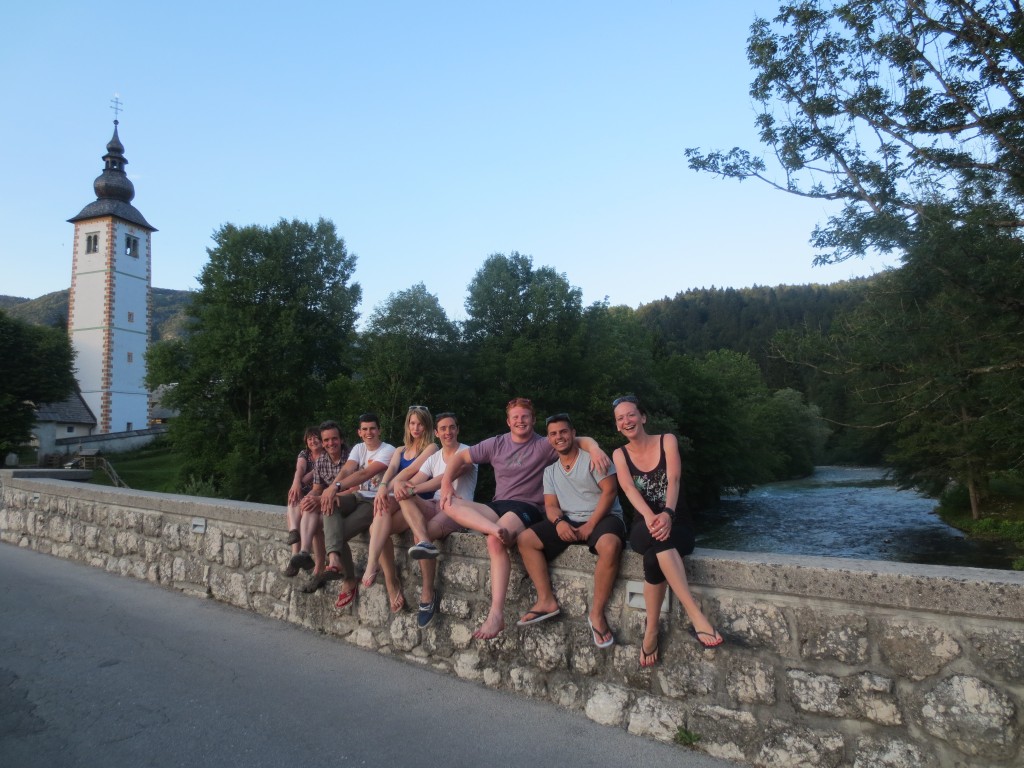 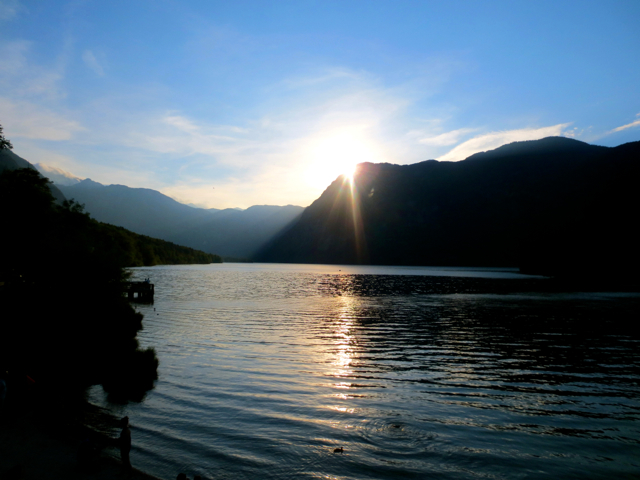 Back to Lake Bled we went where we watched the sun descend beyond the castle painting the clouds pink along the way. As Bled fell into darkness the castle illuminated providing yet more panoramic perfection and enhanced an already beautiful day. I hope the next time we visit we find the beauty spot as aesthetically pleasing as we left it. Although I’m not optimistic, here’s hoping the developers stay well away and leave Bled to radiate the peace and tranquility it deserves to do. 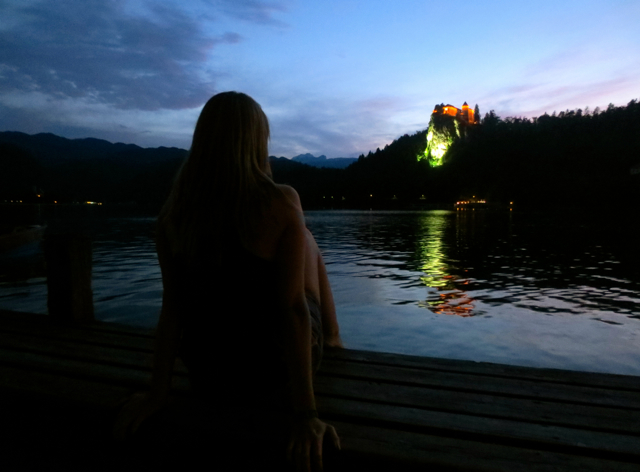 Where we stayed- Apartments Poklukar Bled

What we did- 3glav Adventures 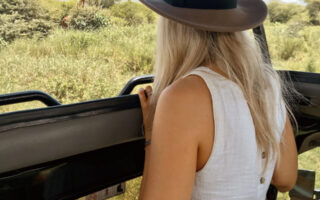 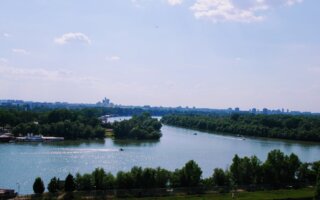 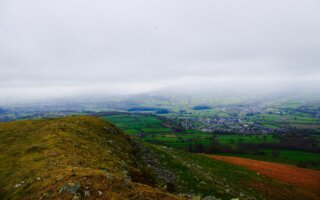