Every girl dreams of her wedding day. Visions of family, friends, excessive cake and celebrations intertwine with months of laboriously liaising with venues and creating seating plans while the ever diminishing countdown to the big day ticks away in the background. No girl dreams of waking up mere weeks away from afore mentioned big day to the news that her fiancee is, quite literally, calling the whole thing off.

Katy Colins found herself in this exact scenario but instead of succumbing to chick flicks and chocolate, she quit her job, sold everything that wouldn’t fit into a backpack and took herself to Thailand. Impressive, right? I was lucky enough to get to know Katy last year as we were both nominated for the Cosmopolitan Blog Awards. Obviously she didn’t open up the conversation with the above anecdote but I was equally captivated by her bubbly personality, similar enjoyment of Prosecco and incredible blue eyes (no really. They’re amazing). Over a dinner Katy told us about her upcoming book release and I knew it was going to be something I would eagerly want to read.

Destination Thailand is the first of three books to be published and I was lucky enough to delve deeper into the author behind the antics and find out more about her take on travel, top backpacking tips and and just how similar she is to Georgia- the protagonist of The Lonely Hearts Travel Club series.

Hello! Happy New Year to you too! I think the best places has to be in Buenos Aires, watching the incredible fireworks display from a rooftop wearing shorts and a t-shirt and drinking a magnum of red wine will always be pretty hard to beat although usually on New Years Eve wherever there is a bottle of fizz nearby I’m happy!

2016 is looking like it will be an exciting one for you, what were some of your 2015 highlights?

Getting my three book deal with Carina, an imprint of Harper Collins certainly stands out for me! I will also remember 2015 for doing my first ever skydive over the coast of France, visiting Northern Ireland to go back to my roots for my dad’s birthday and making the top ten travel blogs by Cosmopolitan Magazine as it meant I got to meet some fearless female travel bloggers like you!

You’re currently living in France. How does life there differ to that in the UK?

I’ve been living here for just over two years which has honestly flown past. I didn’t realise what a stereotype I had become by living in a small and traditional French fishing town writing my debut novel but I wouldn’t have had it any other way. I love France for the friendly people, incredible food and laid back way of life; the shops are closed on Sundays, people take two hour lunch breaks and evening meals can go on for hours. At first I found this quite frustrating (don’t even get me started on the length of time it takes for official paperwork to be sorted out) but now I’ve learnt to go with the flow and enjoy the differences.

Can you pick your favourite three destinations you’ve visited over the last three years?

Hmm that’s tough! Ok, I’d say Chile as I didn’t have any preconceptions about the country before I arrived but I was blown away by how friendly the people were, how incredible the scenery was and the range of things you can see and do there. I loved visiting Amsterdam and it was great being able to drive from France, through Brussels to get there and of course Thailand has a very special place in my heart not only for inspiring my debut novel Destination Thailand but because of how I changed as a person during my long trip there.

Do you like to return to the same places or try somewhere new? Is there anywhere you already want to return to?

The planet is full of so many incredible places that I would feel like I was missing out if I went back to the same place twice. I have so many countries on my travel bucket list that I would always prefer to visit somewhere new if only my bank balance allowed for it!

What are some of the best meals you’ve eaten while travelling?

I’m not a fussy eater in the slightest so will try anything once which has led to some *ahem* interesting food choices in the past. I guess the best meals are always the ones that are the most simple. Whether that is a bottle of red wine, a freshly baked baguette and smelly cheese in France, a bowl of steaming chicken soup in a street café in Thailand or a hotdog from a beach stall in Brazil. I just love all food really!

Can you sum up your worst travel experience in three words or phrases? (For example, mine would be – Food Poisoning. Train. 12 hours.)

Ha ha I love this question! Yours sounds pretty traumatic. Mine would be  – Intruder. Alone. India.

What are your essential travel items?

Being a huge bookworm I have to take my Kindle which has been such a huge lifesaver on long haul flights or overnight bus journeys. Obviously I love to write whilst I travel so a notebook or my lightweight netbook and then finally a decent camera to capture all the moments that I never want to forget. Oh, and immodium. Not sexy but an essential for all backpackers.

Do you have any top tips for backpacking South East Asia?

Go at your own pace and don’t try to pack too much in. There are so many places you feel like you have to see but make sure you’re doing the things you want to do rather than sticking to a rigid itinerary. You will be home before you know it so have fun!

Since your return from travelling you’ve written a book series- The Lonely Hearts Travel Club. How did this go from initial idea to finished publication?

I have always loved to write and dabbled in both journalism and PR before quitting it all to go travelling on my own after being a jilted bride. Whilst I was away I started my travel blog www.notwedordead.com to share my adventures as a newly single and heartbroken backpacker finding her feet again. It was from here that I found the courage to start what became Destination Thailand. It took me a year and a half to write and I actually typed the end when I was in Buenos Aires and celebrated with an empanada and a cold beer! I was also accepted onto the Womentoring project where I had my mentor Rosie Blake give me awesome feedback that helped me find the courage to send my work out to agents and publishers. I received the call from an editor at Carina on ironically what would have been my third wedding anniversary offering me a three book deal. There was much whooping and dancing once I’d got off the phone!

Much like your protagonist Georgia in Destination Thailand, your first travels alone were fuelled by an untimely breakup. Do you have any advice for people who may be looking to travel alone for the first time?

Whether you are travelling solo after a breakup or not it is going to be one of the best things you will ever do and I recommend everyone to try it at least once in their life! You will need to rely on your own resources, be organised and use your common sense especially when in situations that might seem a little hairy. But the best part is how much you learn about yourself, to spend time on your own and choosing to do exactly what you want to do is so liberating. I truly believe travel is the ultimate way to heal yourself after a messy breakup.

Are there many other similarities between yourself and Georgia?

I probably swear as much as she does, not that my parents would be pleased about that! In Destination Thailand there are things that happened to me personally so it will be interesting to hear from readers if they can guess what those may be. In general though I think I’m not as gullible as she is and have a better taste in alcoholic beverages, although maybe not men.

And finally, what can we expect from the next instalment of the Lonely Hearts series?

In the second novel of the series, Destination India (out 25th March 2016), we follow Georgia as she swaps business meetings for Bollywood and spreadsheets for saris as she jets off to India only this time there is even more at stake during her travels. I am currently writing the third book in the series Destination Chile and cannot wait to share Georgia’s South American journey with you!

Thanks Katy. We can’t wait to read them! 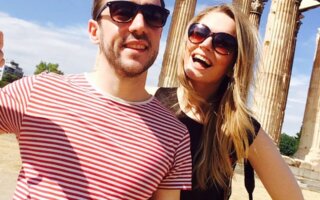